The early sixties were a very exciting time in the domestic auto industry, and a lot of new models were finding their way off the drawing boards and into the showrooms. Certainly one of the most memorable and revered cars of the era was the exciting Buick Riviera. Based on a design theme by GM's Bill Mitchell that he called "Ferrari Rolls-Royce," Mitchell set out to create a car that was both sporty and elegant.


Veteran GM designer Ned Nickles (who also did the 1949 Roadmaster Riviera) was the exterior stylist. Amazingly, the car was created with Cadillac in mind, but when the division paused, the finished fiberglass model, known only as XP-715, was shown to all five divisional managers who were asked to bid for it.

Cadillac felt their volume was already sufficient, a decision they would soon revisit. Chevrolet similarly passed, leaving Pontiac, Olds, and Buick in contention. Of the three, Buick brought in their ad agency, Mc Cann-Erickson and produced the winning presentation- Buick would get the XP-715, which was soon named Riviera.


Built on a shortened Electra frame, and with the Electra's 401 cubic inch engine, the Riviera went into production at the Buick's Home plant in Flint, MI. It was assembled in Plant 04 alongside the Le Sabre, Wildcat, and Electra models. Production was deliberately limited to 40,000 units to keep demand strong.


Riviera was an immediate success and a halo car for the rest of the Buick line up as well. It was no mere coincidence that when Buick assembled its 11 millionth car that year, it turned out to be a fully loaded Riviera. Riviera even began making cameo appearances in the movies, including being driven by Frank Sinatra in "Come Blow Your Horn."

Riviera was a perfect fit in car crazy Southern California and was a big seller for dealers such as longtime Covina dealer Reynolds Buick. In addition, Hollywood bought Riviera in a big way, too- even "logical" celebrities such as Leonard Nimoy fell prone to Riviera's charms.


The opening of the new Reynolds Buick showroom in 1964 was perfectly timed- Riviera was on the floor on day one and is even captured in the commemorative photographs- Riviera was a perfect fit for Southern California and a very important part of their business.


Buick had made many wonderful cars over the years but there's only a handful what we knew at first sight were destined to become a classic- and the top of that list is the original Riviera. Not just a timeless design or a great car- Riviera was love at first sight. 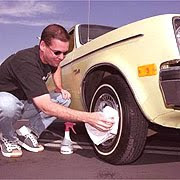